The Official Play of Texas – Seen by over four Million people!

TEXAS runs Tuesdays through Sundays in the summer at the Pioneer Amphitheater in the park. Watch the stories, struggles and triumphs of early settlers. The family-friendly show has singing, dancing, fireworks and lots of Texas humor – Come early for a barbecue dinner in the covered patio!

A LONE HORSEMAN, carrying the flag of the great state of Texas appears atop a 600 foot cliff, signaling the beginning of the most spectacular outdoor musical drama in the world. With a moving swell of the music, the horseman gallops away. Suddenly, a cast of more than 60 actors, singers and dancers takes the stage to kick off the show that millions of fans from all around the world have come to see. Only a state as big as Texas could host a show as big as TEXAS!

THE BEAUTIFUL PIONEER AMPHITHEATRE, carved out of and nestled into a natural basin in the majestic Palo Duro Canyon-the nation’s second largest canyon-comes alive once again this summer with the 50th Anniversary Season of the Official Play of the State of Texas.

IN THIS FAMILY-FRIENDLY SHOW, set against an authentic tapestry of history, the show’s fictional characters bring to life the stories, struggles and triumphs of the settlers of the Texas Panhandle in the 1800’s. Song and dance abound-and a generous helping of good ol’ Texas humor too-with spellbinding lighting, special fire and water effects, including the Dancing Waters of TEXAS! And nightly fireworks highlight the Grand Finale. 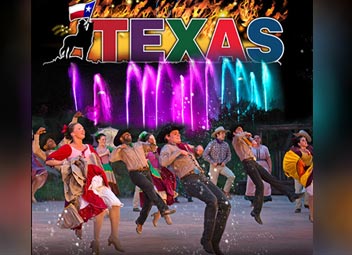