Palo Duro Canyon State Park is a sight to be seen to fully appreciate, as pictures do not do it justice. Better yet, Palo Duro is a place to be biked to fully appreciate. There are three trails designed to be biked: Givens, Spicer & Lowry Running Trail (GSL, for short), Lighthouse Trail, and Capitol Peak Mountain Bike Trail. Other than on Capitol Peak, hikers may be encountered along the way so be careful, especially on Lighthouse Trail.

GSL is definitely the most fun of the three trails, though it may present a few difficult sections for novice riders. Don’t let that steer you away from riding it, however, as it’s the most scenic of the three trails and thanks to the traction of its red dirt, is a blast to ride. GSL probably rates no more than a 2 over-all, but does have a few moments where it strives to be a 3. It’s not overly difficult, but features some interesting sections with drop offs and such along its red dirt pathway.

Lighthouse Trail is a wide path mainly designed for hiking to the Lighthouse, probably the best known attraction to Palo Duro Canyon. Since it’s mostly a wide path there are very few real difficult climbs or drops, those that are really steep have an alternate route offering a bypass for bikes. On the way back, however, it’s totally your choice if you wish to take the drops down. Half way out to the Lighthouse tends to get a bit sandier and loose – more reason to keep both hands on your handlebars. You can’t reach the Lighthouse directly from the trail, so if you wish to make the climb to the lighthouse, bring a lock to secure your bike to the bike rack at the end of the trail. You won’t be able to take your bike up to the lighthouse as the “stairs” are VERY steep.

Capital Peak starts out with a slight climb along a wide path, but after that is pretty much all single-track. Opportunities pop up here and there to catch air, but the trail also provides a bypass if you prefer not to have both wheels in the air. Watch for the prickly pear populations on the sides of the trail and the occasional piece laying on the trail. Again, the red dirt of Palo Duro Canyon makes for excellent traction, so feel free to rip through the turns. Watch, however, on some of the turns as a few of them are a bit sandy. There is a spot or two that’s somewhat eroded, not from bikes, but from natural causes, so watch those pedals. An occasional quick climb pops up here and there that just as quickly become short descents. The trails layout is shaped similar to a figure 8 and measures about 3-3.5 miles; however, a few rogue trails seem to be around every few corners. I’d suggest sticking with the main trail. All things considered, Capitol Peak is probably no more than a level 2 trail.

Little Fox Run Canyon Trail is a loop at the end of GSL, so really it’s nothing more than an extension of GSL. It’s pure single-track that is smooth and winding with a few spots that are real sandy, so watch your speed on these turns. Unlike the majority of the other trails, Little Fox Run is pretty much shaded. Perhaps this shade is the reason that all the hungry horse flies seem to congregate along this route.

One of the great things about Palo Duro’s trails is that although each is its own individual trail, they are all interconnected so you only need to park once in order to ride all three. Cottonwood Flats connects GSL and Lighthouse trail, while Lighthouse Trail and Capitol Peak are actually connected. Juniper Trail is another trail that links the main trails, taking you from the Lighthouse Trail parking area to the Capitol Peak trailhead.

The views at Palo Duro Canyon are spectacular with the various peaks and cliffs, and the different layers of rock are amazing to see. Staying at Doves Rest Cabin, this makes a memorable weekend getaway. 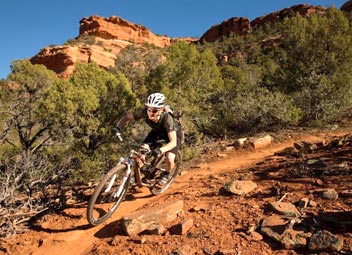