The Big Texan feeds almost half a million people each year from all over the world. It has been featured in countless TV shows, movies, magazines, and newspapers throughout the United States, Europe, Asia and Australia. Countless movies and sit-coms have featured or parodied the World Famous FREE 72-oz. steak dinner (if eaten in 1 hour).

The Big Texan Steak Ranch has received many honors such as being named to MAXIM Magazine’s list of Top 10 Steak Houses in America! Our steaks are carefully aged for maximum flavor, and the aroma from the grill will have your mouth watering as soon as you enter our huge dining room.

A Texas Legend Begins:
R. J. “Bob” Lee, a Midwesterner, whose family roots went back to the four-star Savoy Grill in Kansas City, grew up on stories and movies about cowboys, Indians, horses and Texas cattle ranches. The Texas mystique drew him like a lodestone. When he made his way to the Texas Panhandle and to Amarillo with his wife Mary Ann and their growing family, it didn’t take long for him to embrace the Lone Star State and to claim its persona as his own. His only disappointment was that he couldn’t find a first-class Texas-style steakhouse in an area of the country best known for cowboys and cattle.

In true Texas spirit, Bob decided to create a place that would satisfy the world’s hunger for good steaks and the ambiance of the Old West. He had no idea in those early days that he was destined to become a part of the Texas legends and lore that he loved.

In 1960, R. J. “Bob” Lee opened The Big Texan Steak Ranch in Amarillo on Route 66, the “Mother Road”. Its distinctive architecture soon became recognized across the Mother Road as a good stopping place for great steaks grilled over an open flame. 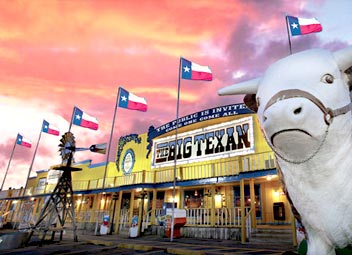